A month or so ago I saw a post in a local Facebook group from the Albacore Museum, they were looking for a donated or loaned manikin to display some recently donated uniforms. The museum is located at Albacore Park on Market St Extension in Portsmouth, NH. It’s a small but nice museum and you can tour an actual submarine – the U.S.S. Albacore. Dating myself here, but I remember when they dug up Market Street Extension to float the submarine in to create the park.

Since I’ve been recently adding to my inventory, I reached out to them. Temporarily I loaned them the torso of a Prestan manikin. It was smaller than what they were looking for and I think they were hoping to keep it. But I told them I’d find them something better that they could keep. They were looking for just a manikin torso to display some recently donated uniforms from a local sailor who had perished when the U.S.S. Thresher sank off the coast of Cape Cod. 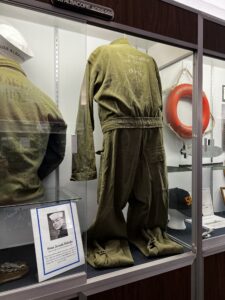 Recently I received some donated equipment, which included a very well used Resusci Anne torso manikin. This manikin was extremely well used, and would never really be able to be used in a class. But I really didn’t want to put her in a dumpster either. So I contacted the nice folks at the Albacore Museum.

Resusci Anne is a bit bigger than our submariner, but is proud to display the uniform.

They were thrilled that we could donate a manikin they could keep. It was snug fit, but they were able to place the uniform on her and install her in their display case.

When the weather is a little cooler we’ll come back to tour the museum and the submarine. We visited years ago when the kids were little, and touring a submarine in the summer is not for the faint of heart as it is HOT inside. Most likely very similar to what our sailors experience. I’m thrilled to give this Resusci Anne a new purpose and job to perform. She was used for decades to teach life saving skills and now can proudly wear an historical naval uniform to educate viewers on the life of a local submariner.

All classes are held as scheduled with restrictions and updated safety precautions.

Please read the Health and Safety Updates for more information.

I will be posting additional updates and class information here.

May 4 Health and Safety Update

Not sure which class you need?

You know you need a CPR or First Aid class, but which one do you need? Different types of licensing, certification or employment have different CPR and First Aid requirements.

Check out my handy guide to see what type of course fits your needs.

Rescheduling classes due to weather

My weather-related class rescheduling policy can be found here: https://coastalcpr.com/rescheduling-classes-due-to-weather/.

What’s new in the blog